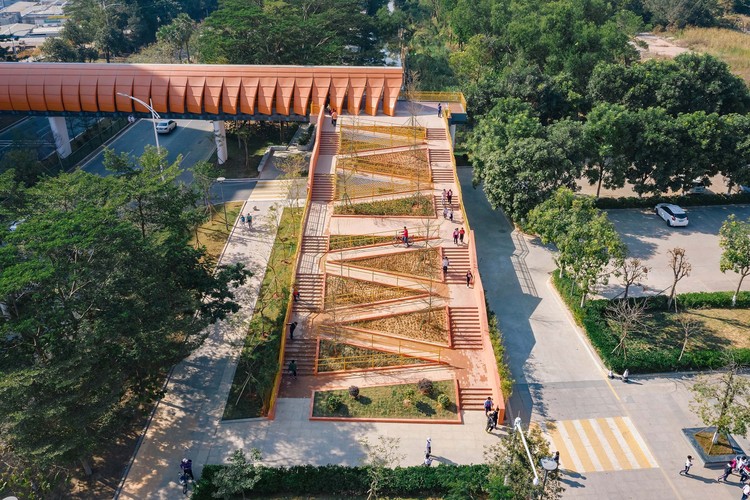 Text description provided by the architects. The gateway is located north of Chang’an City, near the entrance to Chang’an Experimental Primary School, at the foot of Mount Lianhua. A freeway, Lianhu Rd., Runs west to east in front of the school entrance plaza. The bridge was intended to provide students and other southerners with easy access to the north campus by bypassing Lianhu Rd traffic.

Landing. The first problem was how to properly ground both ends of the bridge. On the north side, we enlarged the landing of the bridge in a massive incline towards the school entrance plaza and formed a viaduct over the entrance to the school parking lot. In other words, we “peeled off” the green belt from the existing street and connected it to the bridge, creating a 3D park. In addition to the standard stairs, we have implemented a set of zigzag ramps not only as accessible passages, but also as play areas for children to run and play, and even as access for people on bicycles and motorbikes. .

At the top of the slope, on the west side of the bridge, three small balconies overlook a beautiful canal, completely covered as it crosses the school entrance plaza. Children can enjoy the picturesque scenery of streams and greens, especially the “impressionist view” under the sunset. The south end of the bridge lands in a small forest in the street greenbelt. Besides a normal staircase, a long serpentine ramp winds through the trees to finally touch the ground. Children can climb up and down like flying through the woods.

Why not install an elevator for accessibility? We were told that it would be difficult for the government to manage and maintain. Accidents can happen and its metal components can even be stolen. This detail reflected the big puzzle of governance in Chang’an, an industrial city with a mass of immigrants.

Flying. So what about the bridge body? I was thinking of making a cylindrical airplane cabin, and another colleague wanted a pitched roof that could connote the traditional wooden structure. After rounds of wrangling, I made a compromise: a triangle on one side and a circle on the other, with a smooth transition between the two. At this point, the design began to possess cultural connotations: through eastern and western architectural traditions, the triangle reminds people of sloping roofs in timber construction, and the circle is usually associated with vaults or domes. in masonry.

We can proudly say that the roof of this small gateway in Chang’an simultaneously “indicates” two architectural traditions. Or in other words, it connects the two opposing ideal forms in the history of architecture.

Realization. The smooth transition between the circle and the triangle, and the gradually enlarged cracks in the roof for sunlight, like a mantis shrimp opening its shells, resulted in an extremely complex 3D curved surface for each roof section. Doing a geometric analysis in a computer model was not that difficult, but the shape of the roof led us to spend several months researching suitable construction techniques. We once wanted to use ceramic tiles which were once popular, but not today in Guangdong. We finally gave up on the idea for fear that the tiles would fall off due to the constant vibrations of the bridge. Instead, we chose steel skeletons and aluminum panels to provide reassurance.

The biggest puzzle, however, was the underground work, the parts normally invisible. Above the ground surface, the site appears wide open and easy going, but below it turned out to be densely woven by all manner of mysterious pipelines. We finally realized that the bridge should not only cross the visible canal, the flow of cars and the green belts of the streets above the ground, but also avoid all the underground pipes for electricity, sewers, water supply. water, drainage, gas and telecommunications. He had to do each landing as delicately as a ballerina.

This project is one of the first works of Zhu Tao Architecture Studio, officially recorded in Shenzhen in 2016. It carries our aspiration to bring together two types of poetry in design: grounded and liberating. In September 2019, the primary school reopened and a thousand students flocked to the catwalk. In its daily use, the real life of the bridge has begun.