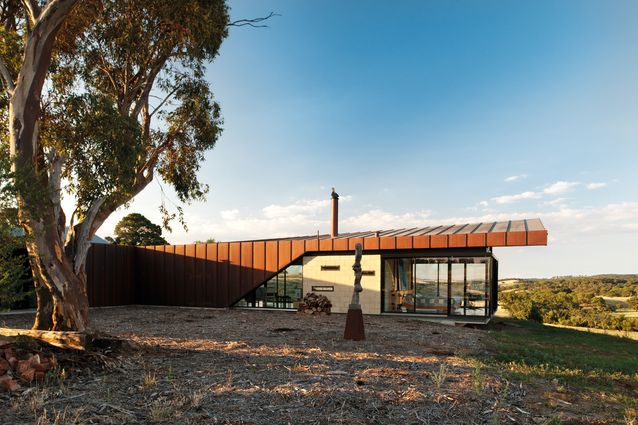 Like many Australians university students, I found myself wandering through Europe in the middle of my studies. Fortunately, I got an internship at the Dutch firm Office for Metropolitan Architecture (OMA). Balancing a lifestyle of around 12 hours of work per day followed by a mandatory nightclub and four hours of restful sleep, rinsing and repetition, the thought of coming home was far from my mind. And then a sick dad and the guilt of not completing my bachelor’s degree at RMIT brought me back to Melbourne. Somehow, I managed to bring Anne-Laure (then my girlfriend and now my wife, business partner and mother of my children) back with me.

I decided to cut the last two years of study to a minimum and then planned to return to OMA, this time to New York. I enrolled in a summer design studio and followed as many topics online as possible. Anne-Laure worked for money in the local pub, pouring “French beers” with too much head. Coming back from Europe meant introducing Anne-Laure to family friends, so we ended up in an old rusty Peugeot 505, on our way to Central Victoria to meet Jack and Deb, with the promise of good company, good food and good wine.

Sitting on the precipice of a valley, surrounded by a ring of cypress trees and hedges, Jack and Deb’s 1850s homestead was picturesque in place. Small shuttered windows and a three-meter-wide veranda, on the other hand, made for a damp and dark interior. His detachment from the landscape was noticeable and became the main topic of conversation that evening.

The next morning, dusty but cheerful, Deb asked if we would be interested in “fixing the place” and “designing a little extension”. While that was certainly an appealing proposition, I diligently reminded him that I was only 23, still finishing college and far from enrolled, to which Jack replied, “Well, we. we expect a good rate then! Despite my thesis project (and New York) looming, I immediately accepted.

That year, I drew the plan over and over again in my head, struggling with the problem of connecting something new to something from the 1850s. My thesis project finally finished, Anne-Laure and I have joins Deb in Rome. Although I don’t fully remember this part, one evening around a bottle of Averna the conversation turned to the extension and I grabbed a napkin and a blue ballpoint pen and I traced the plan. Fortunately, the concept was brutally simple. One: restore the house to its original 1850s shell. Two: create a new annex to continue the protection offered by the existing cypress hedge. And three: separate the extension, encouraging the client to live on the land, experience the changing seasons and embrace the rambling nature of the farmhouse, outbuildings and everything. The new house would be everything the farmhouse wasn’t: bright, light, and suspended above the valley. Jack and Deb’s confidence was unwavering and, with them on board, I began to endlessly bend a roof shape modeled on the gable roof of the farmhouse, abstracting it and folding it across the site to create a courtyard, embrace views and offer protection to the dominant southwest. I made a 1/50 model (because that’s all I knew how to do) and I was like, “How am I going to document this thing?” One of my tutors, Lindsay Holland, kindly recommended Tim Hall as a structural engineer and gave me some tips on how to set up cantilever building elements.

Terrified of really spoiling the opportunity, I swapped my office at the studio I was a member of, Diretribe, for the plush corner of my stepfather Chris’s home office. Chris was a roofer, which was as close to a builder as you can get (and probably explains why my first three houses were all just variant roofs). I browsed through packages of drawings from other architectural firms including Lyons, Wood Marsh, Jackson Clements Burrows and Bird de la Coeur, I chose the fonts and line weights that appealed to me the most and I started producing designs that looked like what I found in the packages. Years of forging my parents’ signatures at school were paying off! To this day, I still believe that the best way to solve a problem is to borrow elsewhere. I walked out of that office a few months later with a fully documented package that included steel shop drawings and custom steel windows.

The construction was a joy. We brought in a local builder, Anton Kennedy, who turned to me after the slab was poured and told me, with a strong Irish accent, “This is the greatest thing I have ever had. built. “To which I replied:” Ditto for us! As the house took shape, so did my life. Diretribe has grown from a studio hangout to a small drawing studio. Our Section 8 alley bar project was designed and we began to collect small interior work and artistic grants. In 2007, the GFC hit and the words of the architects who paraded in New York circulated. Diretribe imploded and March Studio was formed. Deb and Jack’s house – known as Brent Knoll – became our first project, winning an award at the Victorian Architecture Awards and announcing our arrival.